Toronto’s residential architecture has adapted styles from all over the world, from 19th century Victorian homes to modernized downtown condominiums. The city is filled with an array of architectural styles to continue diversifying each neighborhood.

Georgian style homes are an example of Toronto’s early residential architecture. More specifically, Colonial Revival homes were inspired by American and Britain architecture around the revolutionary war. The earliest example of this is the Campbell House on Queen St West located in downtown Toronto. The home was built in 1822 for chief Justice Sir William Campbell for comfortable living and entertainment purposes. In 1972 the house was relocated and now serves as a museum and small art gallery. Colonial homes like this usually appear to have a symmetrical front, two storeys, and classic double hung Georgian windows that are evenly spaced. The style stayed popular in the city until 1850 as it had earlier fallen out of style in both Britain and America. These styles are now commonly found throughout neighborhoods like the Bridle Path and Rosedale.

Another early style home commonly found in the city are Victorian homes. These 19th century styles can be seen in Toronto’s older neighborhoods such as Parkdale and Cabbagetown. Parkdale has such an impressive amount of Victorian homes that it holds one of the largest amounts of the style in North America. Semi-Detached styles became more popular during the late 1800s as neighborhood populations became more dense. In relation, the Bay & Gable style homes are inspired by 19th century Victorians as they are quite similar in appearance with a smaller size and more simplistic design. The overall narrow design was well suited to the smaller lots for low to middle class areas. The name derives from the large bay windows and gable rooftops that each home possesses. 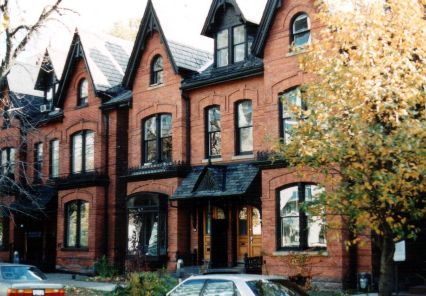 Another unique style found in the city are The Annex style homes. This distinct architecture obtains similarity to other styles like the British Queen Anne style, and American Romanesque with a number of arches, turrets, and large attics. These homes are typically made of brick and sandstone, and are quite large in size. The name comes from where most of these architectural styles can be found, the Annex. As wealth moved from the neighborhood, most of these homes have been subdivided or converted into apartments to suit the plethora of students in the area.

With the rise of the suburbs during the 60s and 70s, many new home styles erupted. One of the most common being Contemporary style. As this style is more modern than the previously stated, they suit the inner city core with the growing amount of condominiums. Contemporary style has a more modernistic approach with tall glass towers and simplistic yet eye catching designs, one of which being Frank Gehry’s condominiums in Toronto’s entertainment district. As for private residences, contemporary homes can be found in neighborhoods like Cedarvale and Rosedale. Most of these homes are fairly large, and consist of large picturesque windows for a modern approach, steel, and concrete.

While these common styles may have their fare share of differences, they all add character and diversity to what is already an incredibly unique city. Georgian and Victorian style display Toronto’s early architecture through old brick and symmetrical features, Bay & Gable and Annex combine elements from different types of architecture to create a distinct look, and Contemporary adds a modern touch to the city through condominiums and futuristic looking homes.

The Nick Pavlov Real Estate Team is a full-service Real Estate Brokerage with skilled and experienced Agents.  Working in the following locations: High Park, Roncesvalles, Etobicoke, Bloor West Village, Swansea, Parkdale and The Junction.  Give us a call to see what we can do for you: (647)351-5554 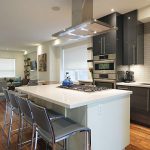